A Funky Junk Guide to Compressors. By Roddy Matthews

When correctly used compression can be almost undetectable to the listener, so what is it for then, and why should anyone spend money on something inaudible? Well, for lots of technical and creative reasons actually, and the good news is that even a modest outlay can dramatically improve results. What follows is some of the truth (but not the whole truth) about compressors, and is broadly intended to help buyers make informed choices.

So what are they?

A Compressor is a programmable gain controller designed to decrease the difference in level between quiet and loud signals passing through it.

A Limiter is a gain controller whose output goes so high but no further, and above a selectable point any increase in level at its input is not reflected in any increase in level at its output.
These two functions are related, and can often come in the same box. If dynamic range were a room then a compressor adjusts both the floor and the ceiling, and a limiter adjusts only the ceiling.

All compressors squash, but some are faster or more savage than others, some more versatile or controllable. The differences are down to both design principles and hardware, and these variations make different units suitable for different tasks. Here are some points to consider.

Valve or tube compressors tend to warm up or fatten sounds, especially when driven hard. This effect is not entirely down to the valves though, and will not appear at its best without high quality output transformers. Classic units such as the Fairchild 670 or Teletronix LA2A give very musical versions of this effect and are prized accordingly. Voices and guitars can benefit from this type of treatment, even whole mixes if used with discretion, but with overuse the results may lack definition.

Solid state or transistor compressors make a virtue out of clarity, speed and adjustability. The best use discrete construction (i.e. the circuits are composed of separate components, not chips or printed circuits), and Class A amplifiers. Solid state types are much more common, and even when inexpensive can be highly effective, so should not be despised or ignored. In some circumstances it may well be more helpful to buy eight channels of versatile medium spec compression than a two channel unit of more rarefied type.

Optically controlled compressors can be of either of the above types but are distinctive in their performance. They are controlled by the interaction of a voltage controlled light source acting on a light dependent resistor, which tends to give a fast but smooth attack.

Any unit with two channels may allow the user to process two signals completely independently (dual or dual mono) or may link the two channels in stereo, so that a peak on either channel affects the output of both. Units with one channel usually offer stereo coupling via a link to another similar unit (or units, sometimes up to eight).

How do you use the things?

A typical compressor has four main parameters, which may appear as separate variable controls:

Some classic models have less than four main controls however, because some parameters are hidden within others, as on a Urei 1176 where the threshold is determined by the ratio.
Some also have Hard/Soft Knee settings, which allow the threshold point to be wider and so kick in more slowly or less noticeably, or Make Up Gain which allows you to restore output level lost by heavy ratios or low thresholds. Some clever, largely older units sometimes do this automatically. 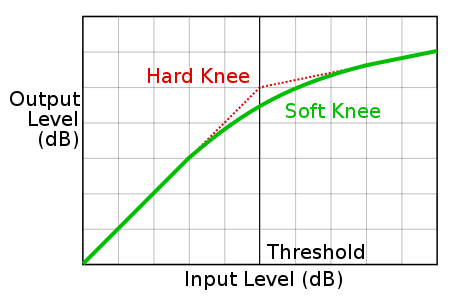 These differences can radically affect the usability of a unit, but are not a reliable guide to how the unit will perform or sound.

Compression is an essential part of putting signals on to any recording medium, analogue or digital. All tape and disk formats have limited ranges for best reproduction, and a compressor helps you to hit this window for more of any performance.
The human voice has a surprisingly broad range between loud and quiet, and devices to cope with this were required very early on in the history of both broadcasting and recording. Historically, limiting was developed first, mainly as a technical protection, but over the decades since compression has become a major creative tool, and an integral part of some forms of music recording.
By reducing dynamic range and then making up gain, any engineer is basically making quiet sounds louder, and so revealing detail. Singers like the way this gives them that little creak at the end of notes: drummers don’t like the way their funny grunts are picked up on the overheads.
A great many mono signals such as lead voices, bass guitars or solo instruments tend to benefit from pulling the dynamic range in a little at the recording stage, which makes them sound smoother and enhances their detail. You will also get less tape hiss back from analogue tape and you will use up more bits in the digital realm thus getting better resolution.
Stereo compressors can help any pair of sounds in the same way, but particularly in the case of piano or drum overheads the whole effect of the sound can be altered. More or less hammer noise can be used as desired, and drum kits can sound more or less roomy to taste. At the mixing stage any compressor can act as a kind of automatic fader, by keeping signals at appropriate levels without them jumping out or disappearing.
Finally (and this is the big one) a compressor can be placed over a whole mix. With a slow attack-fast release setting a good unit can make a mix seem closer, tighter and rather more like you hoped it would turn out.

What makes a good one good, and what should I look for?

A good compressor should have clear displays of input and output level and gain reduction to make it usable. (Big knobs are generally a good sign.) Electrical build quality is absolutely central and you will get much better results out of Class A discrete units than ones made of PCBs with tuppeny transformers stuck together with toffee.

Your precious signal is passing through this thing at least once, and frequently twice, so its ability to pass material without shredding it is fundamental. Connectors, switches, transformers and power supplies all contribute to performance; hand assembled units are likely to sound better than the results of mass production and cheap labour, regardless of the design philosophy.

However, in the real world all different types of compressors can find a place in anyone’s studio, because creative recording involves both making and altering sounds. Naturalistic recording is helped by subtle use of compression, but if you wish to make extreme or denatured sounds expensive transparency might not be your priority, and you might be better off with a budget squash box.

One mid-price mono compressor can get you a long way at the tracking stage; two gives you a choice of approach in terms of character or colouration. Not every sound you record will be equally prominent in a mix and can be treated accordingly by a less glamorous unit. Lastly, compression is much easier to do than to undo, so if in doubt use sparingly.

Valve vs Solid State is another life’s work to explore but in very general terms the following prejudices hold true:

For fat, smooth vocals use valves; for hard, clear drums use transistors. Your call.

« A Guide to Choosing Monitoring Setups pt.3 – Headphones and Headphone Amps
A Guide to EQs »